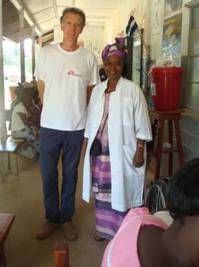 When you reach the last weeks of your pregnancy, you inevitably see your gynecologist more often — and I particularly enjoyed my most recent visit.

Not just because the figure in the scan finally looked like a ‘real’ baby (although I admit, it it is a touching sight to behold, even if it’s not the first child) but because Nico Naumann told me about his recent period spent in Sierra Leone, where being a woman and giving birth is a completely different experience to what we know here.

Naumann went to Africa last month as a volunteer physician for the French NGO, Medecins Sans Frontières (MSF). “My desire to be of service to humanity was one of the reasons I studied medicine. I was privileged to have been able to study and practice in Europe, and I wanted to experience the reality of serving in an under-developed country,” he told me.

Born and brought up in Duesseldorf, the doctor graduated from the University of Pavia and specialized in Cologne. He then continued his studies between London, New York and Stanford before opening his practise in Rome in 1999. He is married to an Italian artist with whom he has two small children.

So, Naumann chose to spend a month in Sierra Leone, one of the worst countries in the world to be a mother — where the risk of dying from pregnancy and childbirth is extremely high. There are five MSF-supported clinics there, including a special consultation area for women, that provide ante- and post-natal care, family planning, treatment of sexually transmitted disease and medical and psychological care for victims of sexual violence.

The NGO also runs the Gondama referral center, a hospital near the town of Bo, that offers pediatric and maternity care, and where cesareans and other obstetric-related surgery are performed.

Every month, the centre admits 500 pediatric patients, 100 under-nourished children and 50 pregnant women. That is where the doctor was working. “Together with another obstetrician I was responsible for the obstetrics ward where over 90 percent of the cases were emergencies,” Naumann told me, trying to describe the circumstances under which they were working.

“Trained nurses administered spinal anesthesia or sedation and assisted in the operating room. But the biggest difference between working in Europe and Sierra Leone, is that what may be routine treatment here, can become immediately life-saving over there. In Africa, medical treatment is an exception not an expectation, and many people die simply because basic medical treatment is not available.”

In fact, tragedies seem almost inevitable. “The worst case I saw was a 17-year-old woman bleeding to death from a detached placenta after a seizure caused by very high blood pressure. It is impossible for me to forget the desperation and grief of her family.”

On the other hand, helping expectant mothers has many a positive side too: “It is a joyous experience to see young mothers in a life-threatening condition, who not only survive but are restored to health as a direct result of receiving surgery. If surgery hadn’t been available, these women would have most certainly died and it is unfortunate that this is the reality in the other provinces where no such facility exists.”

At a personal level, Nico Naumann says his experience in Sierra Leone changed him. “I enjoyed working as part of a team with an international staff of men and women; all disciplined medical professionals working in very basic and harsh conditions. From a human and professional perspective, my month working in Sierra Leone was an enriching experience. That the people of Sierra Leone endure so much suffering was a lesson in humility and makes one acutely aware of what is really important in life.”

With regard to continuing to help in Africa, he says that obviously donations of money (on behalf of everyone) and time (on behalf of physicians) to organizations like Medecins sans Frontières are crucial in the short term.

“Pediatricians and surgeons are particularly needed in Sierra Leone,” he says. “But in the long-term, the people of this country need education. I worked with some very bright local nurses who were performing the duties of anesthesiologists and assistant surgeons. This is frequently found in Africa. The manpower is there, but the opportunity to develop it is lost through lack of educational resources.”

Read this on CORRIERE DELLA SERA